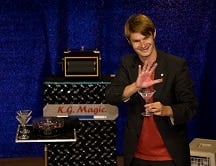 for over 11 years from small kids party environment to full stage large audiences to restaurant and bar magic.

Children’s Magic Show: This is really a one of a kind kids show. There is a lot of active engaging with the kids. Some gags to get the magic flowing then a  magical lolly scramble with some wonderful magic that is an emotional roller-coaster. It they keeps wanting more and more.

Just before the end of the show I have my “teach a trick” segment, which leaves them with the ability to do magic themselves which is very empowering to them and even more mysterious to their friends at school and somehow lasts long after the show has ended.

To this day I still believe the best kids entertainers are  still a big kid themselves!!!

Hypnosis Show: now the majority of people reading this would’ve seen a stage hypnosis show and seen people “cluck like a chicken”. I can proudly say I have never done that. The way in which I perform hypnosis is not geared towards traditional stage hypnosis.

Instead of making people do silly things, I ask them what their hopes and dreams are and what they have always wanted to do but never could, and then do it.

It is very fresh and fascinating to watch as I turn people into their favourite celebrity, make them believe they are invisible or make them drink water when they think it is their favourite beverage. The list is endless and because my hypnotist shows are so personal and never the same that is how I get repeated shows and make my show something that everyone remembers as one of the best hypnotist shows they have ever seen.

As an aside … I also offer hypnotherapy to people wanting to quit smoking or to remove phobias, stress or pain or help with a sleep great for single parents in need of relaxation.